Which Fir Fits You Best? Cultivate’s guide to the perfect Christmas tree.

We’re all walking around smelling like air fresheners at Cultivate lately, ever since the Christmas trees arrived.  While getting sticky sap on my hands isn’t exactly my cup of tea I do enjoy the wonderful fragrance the trees bring with them and the knowledge that this magical time of year is once again upon us.

A Christmas tree can be whatever you want it to be, whether it’s a branch of arbutus upon which to hang your baubles or a fake rendition of this classic holiday icon but to me, nothing beats the real thing.  I have to touch the branches, inhale the fresh scent and yes, see how long it can hold on to its needles before I finally dust off the ornaments, pack them back into their boxes and drag out the vacuum.

A Cultivate we’ve continued the tradition of having the prettiest trees.  Ok, so I’m biased but really, I do love our trees.  They come from a really nice, family run business on the Lower Mainland and we also get a few Island grown ones to throw into the mix.  The trees are pruned over the years so that they’re bushy, strong branched and symmetrical (did you know that it takes at least 8 years to grow a decent tree?).  They don’t look like a chain saw has been taken up one side and down the other just before getting shipped off to stores.  And because they’re cut just before we pick them up they hold onto their needles for a very long time which is why I can get away with keeping my tree in the house a lot longer than I should!

Firs are the most popular of Christmas trees and everyone is familiar with the Douglas fir, which actually isn’t a true fir. That lemony scented big guy can often be a Charlie Brown type tree or it can be ‘cultured’ (pruned to get thicker) and you find them sold all over to be decorated for the holidays. The down side to Doug is that it drops its needles the quickest.  For that reason I avoid it because it would be a bare stick by the time I took it down.  However, there are many other fir trees that hold onto their needles a lot longer and deserve a spot in the centre of the festivities. 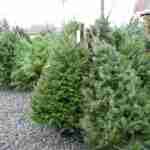 The Grand or Balsam fir has also been a traditional variety with its flat, shiny needles, pudgy appearance and strong fragrance.  You need a bit of room for the width of this one but, to me, it has the most ‘true’ Christmas smell.  However, the needles drop almost as quick as the Doug so don’t keep this one in the house for an extended period. 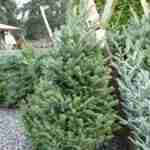 If you are a tad tight on space then you must try a Fraser fir.  Full and fluffy, yet narrow and neat, Frasers are the slim sister to the other firs.  I’ve had Frasers in my last house and everyone always commented on how nice they were with their full yet pyramidal shape and silvery undersides. They tend to be fuller right to the top whereas the others taper off to a single leader standing tall above the top branches. 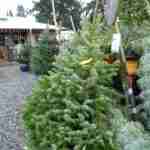 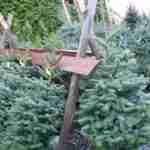 he cream of the crop, the crème de la crème, the best of the best, has to be the Noble and Nordman firs.  Both of these are very similar with strong branches to hold all those lovely glass Ted Jolda ornaments that you’ve been collecting yet there’s lots of room deep inside the tree for the larger baubles where the lights can showcase them.  Stately and strong, they’ve both been my go to trees in the past and will be again this year. 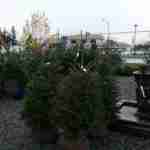 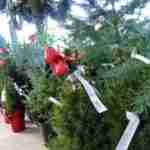 Let’s not forget the live trees, too!  We have a great selection from the ball and burlap Colorado Spruce to smaller, more manageable trees for little spaces or atop a table.

Live trees can’t tolerate being inside for more than a week and must be acclimatized going in and coming back out after the holidays.  Then they can find a spot in the garden or in a planter box to be used again next year!

As for cut trees, keep them in a cool place until you’re ready to set them up.  Just before placing your tree in the stand cut about an inch or so off the bottom so that the tree can drink.  It will be thirstiest the first few days so check the water level in the stand often.  If left longer than a couple of hours without water the tree seals itself up again and will

So, choose fir this Christmas.  Rub the needles, inhale the fragrance and enjoy the holiday season.  For those who don’t want real trees we have a nice selection of high quality ‘Everlasting’ trees, too!