On these somewhat dismal days of winter gardeners are anxious to get dirt under their fingernails and the scent of soil in their nostrils.  While it’s a little early to be really doing much other than the odd job out in the garden there can be some fun to be had in the dirt indoors with begonia tubers.

Starting tubers inside early in the year will allow you to experiment with different varieties, colours and forms than what is available as a potted plant in the greenhouse in May.  If you have the room near a bright window or are lucky enough to have a greenhouse or solarium then you can start these frost tender plants early indoors so that you have a beautiful, blooming plant when it’s time to put out annuals.

Begonia tubers are not really lovely to look at but get past that and imagine the glorious flowers they will produce.  Choose the largest tubers possible as they will get you the biggest plants with the most flowers.  I have some jumbo tubers at the garden centre this year that have promised me they’ll perform like crazy.   Pick your favourites then keep them in a dry, cool place for awhile until you see the some sign of the eyes on the tuber starting to break.  The eyes are the little pink bumps on the tuber that will appear when they’re ready to get growing.

Begin with a good quality seed starting mix or a light, well draining and sterile potting mix and moisten it before you get going.  I like to start begonias in a 4” to 6” pot depending on the size of the tuber.  Fill the pot to between an inch and two shy of the rim.  The tuber will have a concave side where the shoots will appear and a rounded side where the roots will form.  Some people refer to the concave side as the depressed side but I don’t like to think of any garden plant as depressed.  Place the tuber concave or hollow side up on top of the potting mix, being careful not to break off any shoots.

Resist the urge to bury the tuber deep in the medium as this will likely result in a rotting tuber. Instead just nestle the tuber down into the mix so that most of it is submerged.   Place the pots in a spot where they will receive indirect light at normal room temperature.  Keep the soil moist but not soggy and don’t allow water to spill into the hollow.   Sometimes a little warmth in the way of a seeding heat mat will get things going as begonias can often be a bit stubborn.

After some time you’ll see roots developing along the sides of the tuber and there will be more below that you can’t see.  The little bumps around and inside the hollow will start to sprout.  Once the sprouts are about an inch tall move the plants to a brighter location or treat them to a grow light to allow them to build strong stems instead of weak and leggy ones.  You can also replant them into a bigger container at this time and also bury them a little deeper.  This will allow more roots to form above the tuber which will make it sturdier.

As your begonia begins to grow bigger you can help support it with stakes as sometimes the big flowers will be so heavy that a breeze may snap the stem.  Pendulous varieties don’t require staking.

Your begonia plants can be moved outside around bedding plant time, usually near the end of May.  Harden them off by placing them outside on nice days and bringing them in at night to acclimatize them for a few days.  Their home for the summer should be in dappled shade or morning sun with filtered light the rest of the day. 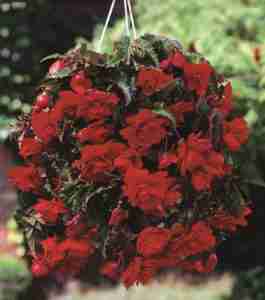 Treat begonias like you would an annual with regular fertilizer and watering but let the soil dry out a bit in between watering.  Sometimes double flowered varieties will produce single flowers if not fed properly. Water at soil level if possible as overhead watering can lead to mildew problems and can also damage the blooms.

Beautiful big begonia tubers are available in February at Cultivate Garden & Gift.  From frilly Fimbriatas to perfect Picotees there’s sure to be a variety that will tickle your fancy.