I had so many things to write about this week but one question keeps popping up at the garden centre that I figured I’d answer it here.  Yes, you CAN plant in the summer!   Sure, there are a couple of caveats to that statement but generally, yes, you can and why not?  The weather is cooperative and more enjoyable since you’re not out there with raincoat, waterproof shoes with freezing fingers, and if you’re like me you have more time on your hands in the summer so why not take this opportunity to plant new things or begin a new garden?

In spring I just don’t have time to pluck a weed let alone plant a garden so my planting gets done when I have time off.  In fact, if I succumb to impulse shopping the new and wonderful things that come off the truck in April and May they are more likely to perish in my back yard waiting to be planted than they would be if I had brought them home in summer and planted them during temperatures in the high twenties!

New gardens have been built and old ones have been renovated in the dog days of summer with everything surviving quite splendidly for me.  I’ve been planting like mad in the heat this year and it has all settled in nicely.

You must be able to water your newly planted areas, though.  That is the biggest, most important factor in summer planting.  If it dries out for any length of time in the hot weather, well, then it is toast.  So, watering is a must.

Generally when something is newly planted the ground around the plant has been worked over, allowing water to penetrate better, so it’s easier to get the water to where it has to go, deep into the roots.

Help your new plantings get established by using GardenPro Transplant liquid.  Transplanter liquid will speed up the gr

owth of those fine, white roots.  A top dress of Sea Soil Original will go a long way with a slow release of organic nutrients and it will also act as mulch, holding in moisture.  I use it in the planting hole, also.

One thing I’d stay away from, though, is moving plants in the heat unless you absolutely have to.  That can be stressful on the plant because you’re basically tearing it out of the ground, cutting off a lot of the fine, white roots.  These roots are the workhorses for the plant, allowing it to take up nutrients and water.   That’s not to say I haven’t done it and been successful, it’s just more likely that the plant will perish at this time than any other.  If you have to move a plant from one area of the garden to another then dig as big a root ball as possible and don’t forget to water!  Container grown plants take easily because you’re just teasing some of the roots away from the root ball, not doing any major ripping out of the ground.

Summer planting also provides some time for the roots to take hold and grow before winter sets in.  If we happen to get cold temperatures early then the plant is already established.

I find quite often that some gardens lack colour at the latter part of summer because they were mostly planted up in the spring.  When you purchase plants in the spring you’re tempted by all the lovely things in bloom, passing by the boring sticks (deciduous shrubs) that haven’t quite got their show on yet and the pots of mostly dirt with treasures hiding inside.  Not to mention quite a few of the summer blooming perennials just don’t arrive at the garden centre until summer when they’re in full and glorious bloom. 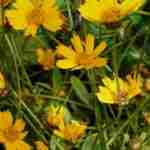 August is the time for the yellows of Rudbeckia and Coreopsis, the reds and purples of Echinacea, blues and pinks of Hibiscus, white Shasta Daisies and ornamental grasses.

The Potentilla and Abelia shrubs are flowering like mad and the Hydrangeas are doing their thing, all waiting for someone like you to tuck them into a nice spot in your garden.

So take a look at your garden and if you find a spot needing some colour head down to Cultivate to see what is blooming.  We are open 9-5 daily.