While we may drool over big, blousy English Gardens, expansive lawns for croquet or badminton games and large patios on which to entertain, the reality is a lot of us have small yards, tiny balconies and little pockets of planting areas. This isn’t necessarily a bad thing as small areas can be more interesting and easier to manage. Intimate plantings can often pack more punch than a huge perennial border.

Finding trees to suit a small space can often be challenging. While you may love the big Dawn Redwoods, realistically they aren’t suitable for many yards. However there are options for some trees that, while they may not be exactly what you love, they can be close versions that you will come to love just as much if not more.

While the word dwarf is often used when describing a plant, sometimes your definition of dwarf doesn’t necessarily match the one who named the plant in the first place. Dwarf can mean just a smaller version of its parent which could be misleading if its parent grows 60 feet tall and the dwarf version grows to 30ft.

Check plant tags and bear in mind that most tags from growers are basic and often state the plant height at 10 years, not at full maturity. Also, your site, your soil and how you look after the plant in the future will have an impact on how the plant grows.

Latin names of plants can tell a story about the characteristics of the cultivar so pay attention even if they’re tough to pronounce. Anything with ‘nana’ in the name is usually a good choice. In this instance it doesn’t mean an older family member who bakes you cookies, it means that it’s dwarf in habit but again, check the tag for the mature height.

‘Prostrata’ or ‘reptans’ or ‘repens’ are also good because they mean creeping. ‘Fastigiata’ suggests narrow but is often still tall. Stay away from ‘grandi’, ‘macro’ or ‘magnus’ otherwise you’ll be likely to be ripping them out in a few years.

Some of my favourite conifers are pines but most cultivars are on the mid to large scale however Pinus thunbergii ‘Kotobuki’ is a cute little pine perfectly made for small yards and my go to for small. Being a narrow and a true dwarf version of the Japanese Black Pine, it only grows a couple of inches a year so will take a while to reach its full height of about 5ft. If you’re into bonsai then this would be a great plant for you. 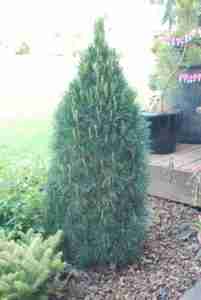 Pinus sylvestris ‘Green Penguin’ is one I’ve mentioned before and, while we were sold out for a bit, we have them again.  Short, squat and full of character this little pine is a great substitute for Alberta Spruce which starts small but eventually become a towering lug in the garden whereas ‘Green Penguin’ stays truly dwarf.  Another bonus is that pines aren’t susceptible to spider mites like the spruce are.

Don’t be afraid of a little height in a small garden but keep in mind that a lot of plants that are tall end up being just as wide. Go for columnar forms such as Juniperus communis ‘Gnom’ (a columnar juniper maturing approximately 12ft tall by 6ft wide) or Picea omorika ‘Bruns’ (a tall Serbian Spruce but growing only about 8-10ft wide at maturity).

For those who love Japanese Maples but can’t afford the room for one there is Acer palmatum ‘Hupp’s Dwarf’. It’s a rare little one, a true gem in the world of Japanese Maples and grows only to about 3ft tall and wide. Dense, compact and upright in form it would also be a great bonsai specimen.

So just because you have a small space doesn’t mean you have to give up impactful specimen plantings. Choose carefully and consider not only height and width but canopy also. You can pack a lot of plants under a broad canopy tree that has a single tall trunk.

A perfect lawn for croquet with borders of towering trees. 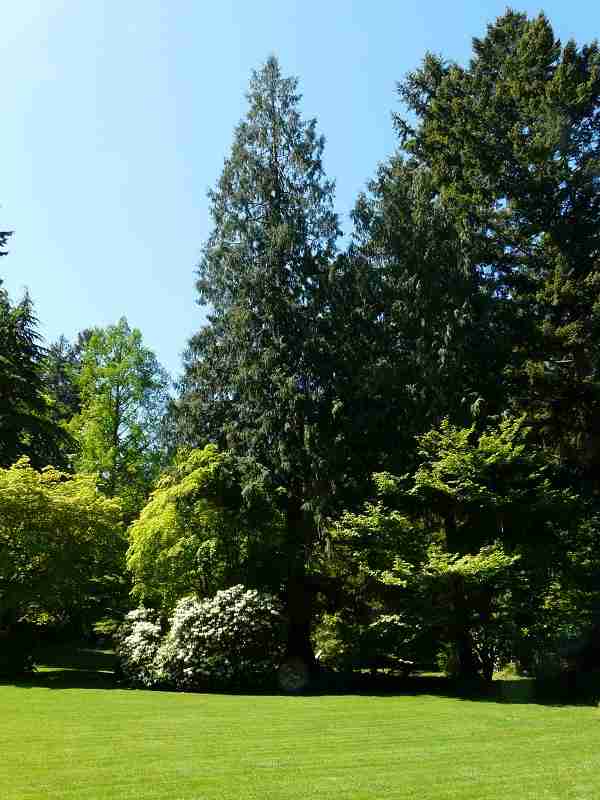