Raspberries, How to Prune and When

“What do I do with my raspberry plants right now?” This is a question we hear at the garden centre a lot so obviously there’s some mystery as to when to cut back raspberry canes, if one should at all, and how to go about it.

Raspberries grow from perennial roots that produce stems called canes. The canes generally grow to full size the first year, looking lovely and green but, to the perplexity of the home gardener, usually do not produce fruit that season. This may send the gardener to the garden centre to ask what they are doing wrong. In fact, fruit production, for most varieties, starts the second year.

Just to confuse the issue, there are two types of raspberries. Summer bearing types give you one crop around July of the second year. Everbearing types produce two crops, one in summer and one in fall.  They will produce fruit on the top of the cane, which then dies back. If you leave these canes they will fruit the following summer on the bottom portion that didn’t have fruit previously. If you’ve purchased new plants from the garden centre then they would most likely be two-year-old canes.

Clear as mud? Okay, say spring has arrived or at least it will hopefully in the near future. Go to the garden centre and select a raspberry plant (or two). Take it home and plant in a nice sunny spot in humus-rich soil. Spring finally gets here. When your raspberry cane starts to leaf out give it a top dressing of manure, Sea Soil or compost (or all three if you want), and watch it grow some more. Pick raspberries in July. If you planted an everbearing variety, pick raspberries in July and again in September or October.  Winter arrives. Your raspberry canes lose their leaves and look like sticks through the winter.

When to Cut Canes

Basically, on summer bearing varieties, once a cane has produced fruit it can be cut down to the ground during your fall clean up when the leaves have dropped. For everbearing varieties, the canes which had fruit lower down the plant can be cut down in your fall clean up.  Leave canes that had green growth or fruit just at the top, as they will be your fruiting canes next year. 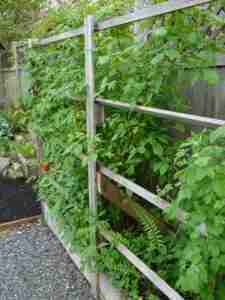 Sometimes I disregard the rules and chop it all down. Usually this is because I didn’t get my support system in place early in the spring and the raspberry canes are leaning over my pathway making it impossible to get to the herbs without getting tangled up in thorns.

If you forget the lingo of everbearing and summer bearing, just remember to cut out the canes that gave you masses of plump, red, tasty fruit.  Seems a cruel end to a bountiful cane, but don’t worry – there will be more next year. By the way, spring is a great time to plant raspberries and yes, we have some.