“When and how do I prune hydrangeas?” is one of the questions frequently asked at  Cultivate.  Hydrangeas seem to be one of those mysterious plants where no one is really sure how to go about tackling them.  It’s a shame all plants can’t be treated the same because then the answer would be simple but unfortunately life isn’t that simple and therefore I will try to answer this question for those still wondering.

For me, because I don’t have a lot of time to plan out my chores in the garden, they get done when I get around to them and not necessarily when they should be done.  So quite often if a plant doesn’t like the way I treat it then it either bucks up and performs anyway or it’s toast.  Most often it bucks up, as I hardly ever toss anything.  In the past I’ve usually tidied up my hydrangeas in the spring once I see some healthy new growth, pruning back the winter kill to a nice set of fat leaf buds and taking out any dead or gangly branches or ones that were in the way of something else.  My hydrangeas have always bloomed just fine.

However, there are guidelines to pruning hydrangeas if you are a rule follower.  Basically there are two categories of hydrangea pruning.  One is for mopheads, 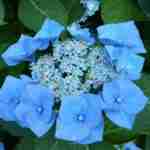 lacecaps (macrophyllas) and oakleaf hydrangeas. The other is for paniculatas (PGs) and arborescens or snowball types (Annabelle being the most popular).  If your hydrangea produces blue, pink, purple flowers then most likley it is a mophead or lacecap.  White flowers (and blush pink) can be found in both groups but the second group tends to have thinner and floppier leaves.  Oakleaf hydrangeas are easy to identify because their leaves resemble oak leaves.

The mophead (and their friends) category blooms on old wood, the stems that have 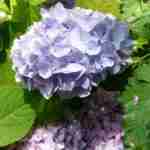 been on the plant since last year.  Mopheads really don’t require any pruning unless they’re getting too big for their space or they have some dead stems.  If you feel you must prune because that’s what one does in the garden then sharpen your Felcos and go after the dead and gangly stuff first then take down about a third of the woody stems to the ground to revitalize an older plant.

If you want to preserve the most amount of blooms for next year then you should be pruning in summer before the buds are set for the following year.  If you’re deadheading after summer then as long as you don’t cut any further than the first set of large leaves you should be fine.  There are exceptions to every rule, which is why I usually disregard the rules because it’s too confusing.  For example, some Hydrangeas like ‘Endless Summer’ may regenerate their buds after a damaging frost or after pruning.

The second category blooms on new wood, the supple green stems that shoot out 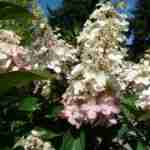 that spring.  These can be pruned pretty much anytime.  Of course…an exception…if you want flowers then don’t prune them hard in late spring or summer when they’re setting up flowers.

My general rule of thumb is if you’re itching to cut stuff off then only cut off 30% in one season.  That way, you feel like you’ve accomplished something but you haven’t damaged the integrity of the plant.

While we’re speaking of hydrangeas, another question I get frequently is how do I keep my blue hydrangea blue?  Add Aluminum Sulphate to the soil in early spring if you want to encourage blue shades or add lime if you like pink shades better.  A top dress of Sea Soil and a sprinkle of Fritted Trace Elements will help keep it healthy.

I’ve often said that gardening should be, for the most part, an enjoyable pastime.  If it becomes a book of rules and regulations then it becomes chores and that’s not so enjoyable.  So, do everything in moderation, don’t be tied up by when and how things SHOULD be done because quite often different people in different places do it differently.  Follow basic guidelines and make sensible choices and for the most part you’ll do just fine.