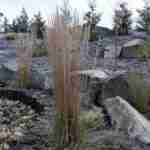 Every late summer, fall and winter I love ornamental grasses in the garden.  They stand tall (or short depending on the type), they bring life and movement, waving in the breeze, and they glisten and sparkle in the sun or frost.   Every spring I hate ornamental grasses in the garden, at least the warm season ones.  They need to be cut back before the new growth starts and every year I forget to wear a long sleeved shirt.   By the end of my grass cutting day my arms bear the markings of my battle with the blades.

Ornamental grasses are a definite favourite 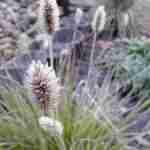 of mine, though, and by the time summer is in full fling I’ve forgotten my day of battle.

Grasses really do add a lot to the garden, especially in late summer and fall when it’s their time to shine.  There’s just something about the way they contrast with other plants.  The tall, vertical structures of Calamagrostis ‘Karl Foerster’,  the softly arching form of Miscanthus sinensus ‘Gracillimus’ and the short spikey Festuca (Blue Fescue), not to mention that I will never have a garden without Hakonechloa (Japanese Forest Grass).

Grasses basically come in two categories, warm season and cool season.  The cool season cultivars are mostly evergreen which means they keep their colour year round and just need a bit of a cleanup come spring.  This can usually be done by running your gloved hands through the clump, pulling the browned blades out.  Every so often I will cut a cool season grass down to start over if I find it’s just a bit too messy looking but generally they just need a bit of tidying.

If you like black then try Ophiopogon (Black Mondo Grass).

This cool season grass is low and spreads to make a dark ground cover.  It also looks great in a container paired up with a flowers in bright purple or fuchsia pink or use lime green contrasts for a more subtle look.

Warm season types are the ones that turn light beige in the winter and begin their new growth from the base every year.  These ones need to be cut back now before the new growth starts.  If you find you’ve left it too late and new growth is already starting, don’t worry, cut back as far as you can.  Even if you cut back some of the new growth it won’t harm the plant.

I grab a handful of blades and cut back as far as I can go, usually a couple of inches from the ground.  Don’t do this on a windy day otherwise you’ll be chasing the long blades of grass all over the garden and be careful if you have a sprinkler system not to cut the sprinkler line that might be hidden in the middle somewhere. 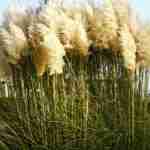 Another popular grass that should be tended to sooner rather than later is Cortaderia selloana (Pampas Grass).  This is the one with the large, creamy white or pink blush plumes on the tops of tall stalks with arching and very sharp blades below.  Pampas Grass is extremely sharp so don’t be like me and forget to wear long sleeves the day you’re tackling it or you’ll feel like you’ve spent some time in a Slice n Dice.

Grab a clump in your hand and with sharp pruners cut about 6” from the base.  You can also tie it in bunches before you cut to make hauling away easier.  You will notice as you cut away that the inside of the clump is mushy and looks like its rotting.  Don’t worry, this is normal, just clean out as much as you can.  Pampas grass grows larger on the outside every year while the inside dies back.

Grasses may not be a maintenance free type of plant but in my opinion they’re worth the small amount of work in the spring.  By late summer, through fall and in to winter you’ll find yourself admiring their majestic form, frothy flowers or pleasing plumes over and over again.