“How often should I be watering my garden/plant/tree/container?”  The answer to this is “I don’t know.”  Now that probably isn’t the answer you want to hear and really I’d rather sound smart and knowledgeable and whip off a great reply but to be honest there are so many variables in these situations that there really isn’t one clear answer.

First off, what is your soil like?  Is it rich in organic matter, pliable and loamy, loose and easy to dig?  Then water well but not necessarily often.  Is it dried and caked over so that water beads and runs off it?  For this type of soil I water briefly, giving the surface a chance to rehydrate so that the water doesn’t just run away and then I go back and water for a long time.  Also, work it over gently with a fork to break up the dry surface.  Is it sandy and rocky and water just drains through never to be seen again?  Then I would water less but more often. Work on adding compost, Sea Soil and other amendments to it so that it holds moisture better and creates a good environment for all the other things that go on in the soil.

Then there’s mulch.  If you were on top of your game you would’ve mulched the heck out of your garden in early spring when we had all that rain and the ground was moist all the way through.  Mulch, such as a good inch or two of Sea Soil, helps conserve the moisture by covering up the soil where the roots are and keeping it cooler for them.  Mulch should be re-applied every year as it breaks down over time and works its way into the garden.

What does your plant/tree/shrub require or what type of garden do you have?  Is it a succulent garden where the plants have fleshy leaves with which to store water?  Do you have banks of lavender and Russian Sage (Perovskia)?  Probably not a lot of watering is needed once the plants are established.

Do you have a jungle of hostas, astilbes, ferns and Japanese Maples where a decent level of moisture is required otherwise fronds dry up and leaf tips brown?   Is it a shady garden that requires less watering because it doesn’t dry up as quick from the sun?  Is the garden competing with mature trees that like to steal all the moisture?  Or does your garden have a full southern exposure with no shade to be seen? 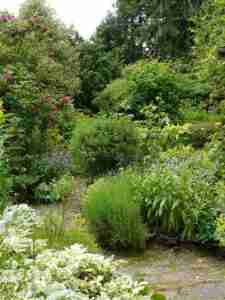 Is it an English style where it is so jam packed that there is no room for weeds?   For a garden like this you’d probably water deeply for a longer period of time but less often as the shelter of the plant foliage helps stop evaporation.  Keep in mind there are a lot of plant roots down in that soil that all need their share of water.

That brings us to “How long should I water for?” another take on the first question.  Again, no clear answer.  First, check your regional sprinkling regulations to make sure you’re watering when you’re suppose to.

The best way to determine how long to water for is to water for what you think is long enough then take a trowel or shovel and push the soil aside until you find it dry.  Is it deep enough to reach the bottom of the root ball?  Probably not.  Water some more, dig again, have a look.  Water more.  Keep doing that until the water actually makes its way deep down into the ground.

If the water is consistently making it through only the top inch or two of soil then that’s where the roots of your plant are going to migrate to.  If that happens then they dry out even more quickly because the moisture evaporates and the soil is dry again…and hot.  This does not bode well for your plant.

If you can get the water to travel down, down, down then your plant grows its roots where they should be, in the cool, moist earth below.  The moisture sticks around longer and the soil is cooler.  The result is a happier, healthier plant and actually less watering because you don’t have to water as often.

Also, don’t make the mistake of just concentrating your watering at the stem or trunk of the plant and keep it off the foliage.  Remember that roots grow horizontally as well as down and it is the fine, white root tips that take up the most water, not the woody trunk, so water under the canopy and a little beyond.  This is called the drip line, where the water would drip from if it ran off the tips of the most outer leaves or branches. 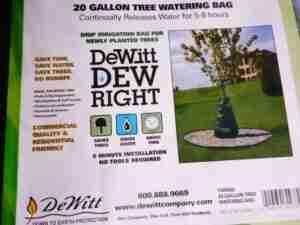 Which brings me to those tree watering bags that zip up around the trunk of a tree, you fill them with water and they slowly leak moisture over a few hours.  While great for newly planted trees and trees that have been in the ground up to a few years maybe, they are really useless for old, established trees.  Think of where the feeder roots are on mature trees.  They are halfway out and beyond the edge of the canopy. Those are the roots that take up moisture and nutrients, not the thick, woody trunk or roots near the trunk.  So, slapping a tree bag on a 10 year old tree will make the grass and weeds beneath happy but the tree, itself, will be giving you the eye roll (if trees had eyes).

For lawns the general rule of thumb is to put an empty tuna can in the path of your sprinkler and when it’s full then that should be enough water. Again, this all depends on what type of soil you have and what type of grass. I’d be inclined to water deeply to get those roots growing farther down.  Remember, a lawn’s natural dormant time is summer so it really doesn’t hurt it to go yellow as long as it isn’t getting a lot of use.  It will green up again when the rains arrive in the fall.

Really, when asking about watering it comes down to all of the above, especially what type of soil you have.  I cannot stress enough that the best way to check is to dig down to see how far the water has travelled…or rather not travelled.   You’d be surprised.