Tigers & Bears in the Garden 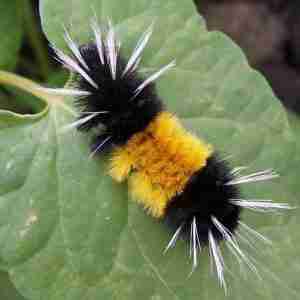 I have tigers and bears in my garden but it’s nothing to be alarmed about.  These ones are small and fuzzy, move slow and can be easily squished under a shoe if you’re not looking.  I’m talking about caterpillars and my kids always want to keep them as pets while the knee-jerk reaction in me says “No!  They eat my plants!”

We’ve all been somewhat sucked in at some point in our lives by the caterpillar commonly known as the Woolly Bear, with its fat black body with the orange band around the middle and the tufts of white sticking out both ends.    How can you not like something with a cute name like that especially when it curls up in the palm of your hand?

The Woolly Bear is the caterpillar stage of the Spotted Tussock Moth (Lophocampa maculata), a rather boring tan coloured moth with darker blotches that likes to bang into the porch light at night.  The caterpillar stage of this moth feeds on deciduous trees such as willows and maples and prefers to hang out on its own as opposed to groups so you really don’t notice a huge amount of damage in the garden due to this guy.

You can usually spot these banded caterpillars in late summer, crawling about somewhat comically.  They forage until fall and overwinter in a self-made cocoon of silk and body hair, emerging in spring as an adult moth. 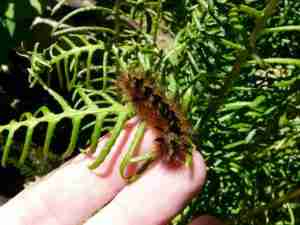 The tiger in my garden is actually the caterpillar of the Silver Spotted Tiger Moth (Lophocampa argentata) and it is commonly mistaken for a tent caterpillar just because it’s about the same size and orange-brown in colour and people are so paranoid of tent caterpillars that any caterpillar that is rusty coloured is automatically guilty of pitching a tent in a poplar tree.  However if you really look at it compared to the tent caterpillar it really is quite different.

The Tiger Moth caterpillar has a dark coloured body with tufts of rust orange and black hairs along with yellowish tufts on its back whereas the tent caterpillar is less hairy and has a white stripe along the back with multiple spots and blotches.  Also, tent caterpillars appear later in the season and on deciduous trees only.

The Silver Spotted Tiger Moth is a little more interesting looking than the Tussock Moth if you can call any moth interesting (that adjective is really reserved for butterflies, don’t you think?) with creamy white and brown patterned wings and silver spots.

Unlike the Woolly Bear, the Tiger Moth caterpillar feeds on coniferous trees (with needles) such as hemlock and fir.  They make a nest of silk threads where they hang out with their siblings during the colder months.  In spring they disperse and feed until mature, sometime in June.

In June the caterpillars spin themselves a cocoon using their body hair mixed with silk threads.  Unlike their ‘bear’ cousins they emerge as adult moths only a few weeks later and find a suitable tree to lay their egg masses, starting the next generation.

Usually neither of these caterpillars do enough damage to warrant action however if the nests of tent caterpillars are unsightly you can either prune them out and dispose of them or apply a spray application of BTK on your trees, a naturally occurring bacteria (Bacillus thuringiensis) that is toxic to caterpillars when they eat it but perfectly safe for other insects and wildlife.  You need to apply this when you first notice caterpillars actively eating, before they hit the pupate stage.  While it may be a bit late for control of the Silver Spotted Tiger Moth, BTK certainly will work for tent caterpillars which will be coming soon to a tree near you.