“What are those big purple lollipop flowers and do you have any?” is a question we get quite a bit in late spring when people see these flowers blooming in someone else’s garden.  They’re alliums and they are available in the fall as a packaged bulb.

While a member of the onion family, alliums are grown for ornamental purposes and ornamental they can certainly be.  There are many, many different types to choose from, some short, some tall, some purple, white, pink, even yellow or blue, big, small and in between.

The most popular and recognizable are the large, pom-pom like flowered alliums such as ‘Purple Sensation’, giganteum and ‘Globemaster’.  These ones tower over the garden and produce large lollipops made up of many tiny flowers.  They do well in large groups in the back of the border with shorter perennials planted around them. 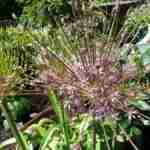 One of my favourite alliums is Allium schubertti.  It shows up like a sparkler in the garden with shorter stems and a flower head resembling exploding fireworks.  I like to let the flowers dry in the garden and then use them in arrangements or alone in a dry vase as they last forever.  Sometimes I’m not quick enough to pluck the dried flower stems and a strong wind will leave me chasing them across the lawn. 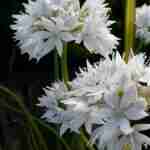 If you have a white garden there are alliums for you, too!  ‘Mount Everest’ is similar to its tall purple cousin only in white while ‘Ivory Queen’ is of the shorter variety and is at home in the front of the border.  Allium neapolitanum has loose flower heads, giving it a lacy affect and will naturalize nicely.

Are you a fan of sunny yellow?  Look to Allium moly luteum.  It has smaller flowers that will naturalize without being invasive.  Is pink your colour?  Allium ‘Cameleon’ changes colour as it matures from a dusky pink to white with pink veins.

Do you like something that will attract the curious?  Then plant Allium ‘Hair’.  This one is difficult to describe but you could say it looks a bit like an alien plant or perhaps me when I first crawl out of bed.  It’s best planted in a large clump so that it doesn’t get lost.

All alliums like well-drained soil and sunny location.  Other than that, they’re not too fussy.  Plant bulbs 2 ½ time their own depth in fall and, for best impact, plant as many as you can afford to or plan on adding to the patch every fall.  I’ve found that a package of 3 doesn’t do much but 9 or more starts to make a statement, especially with the large flowered, tall ones.  Plant alliums among shorter perennials that will grow up and hide the leaves as the alliums die back. 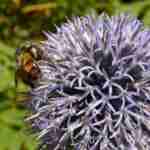 We have many types of Alliums to choose from at Cultivate each fall and I encourage you to give at least a few of them a try.  Bee friendly but deer, rabbit, squirrel resistant, drought tolerant and able to grow in a variety of soils (except wet), alliums have earned their spot in my garden.