The Dirt on Dirt

The industry joke about dirt is that if it’s in a bag and sold in a garden centre it’s called ‘soil’.   Perceived value, I guess.  Who wants to pay money for dirt? Today the ‘dirt’ we sell is actually more than just dirt; it’s rich in organic matter, has peat moss or composted manure mixed in and is dark and loamy.  Regardless of what its called, soil or dirt, it’s the building block of the garden.  Good soil, good garden.

Your garden contains an underground city of microscopic organisms, earthworms, fungi, bacteria and other things that contribute to the healthy structure of the soil.  This city needs to be fed continuously with organic matter to survive.  Some people run screaming when they hear words like bacteria and fungus but really, most of the ones that exist in the soil are good ones.  They play a vital role in the health of a garden.

I try to add a good layer of leaf mould (shredded leaves) to my garden in the fall. 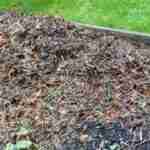 During the winter it decomposes and adds wonderful nutrients to the soil and feeds the important microorganisms that are essential.  In the spring I rake up any bits that haven’t completely broken down and throw them in my compost bin or in the case of my vegetable garden I just dig them in.  I top up the ground around my plants with composted manure, Sea Soil and organic matter that I’ve cooked up in my compost bin the previous summer.

Don’t be fooled into thinking you’ve done your job if you toss some chemical fertilizer down.  This is like fast food to your plant but it does nothing for the soil structure.  Whatever isn’t used within a day or two is leached away and overuse of these fertilizers can actually damage the life that exists in healthy soil.  Some popular chemical fertilizers are very high in salt content and can kill the beneficial fungi and bacteria.

I’m not saying there isn’t a place for chemical fertilizers.  Just try to use organic based brands, use them sparingly and keep in mind that they are a supplement, like the vitamins we take.  We still need to eat.

So the next time you take a wander through your garden be aware of what’s going on below.  Hundreds of thousands of bugs and microscopic things are working for you, tirelessly and without pay.  Be kind to them.  Nurture what’s under your feet.  The dirt.