April showers…we all know how that saying ends and it is a very true phrase although sometimes we get snow in April but lets keep quiet about that.  With that rain comes peonies and the reminder that it is important to stake them otherwise their heavy heads, laden with water, will be resting on the ground. 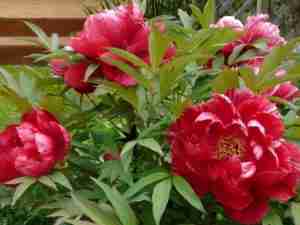 Peonies are one of my favourite ‘blousy’ type flowers.  Very English garden, inspiring paintings and enticing one to fill vases of these romantic flowers to enjoy inside.  Bush peonies and tree peonies, fernleaf and Itoh (hybrid cross between bush & tree) types, they’re all wonderful.

Peonies (Paeonia) are mostly herbaceous perennials meaning they die back to the ground every year and re-emerge next spring.  There are also tree varieties that have a woody trunk.  Very hardy for our climate and easy to grow but they do have a few rules.  Full sun is preferred otherwise flower production gets limited and disease can cause problems.  Well-drained soil is a must.

Peony supports are recommended as without fail, just as the flowers open to their fullest we’ll get a huge rainfall and the peonies will hang their heavy heads, often resting them on the ground. The trick is to get the support system in the ground just as the new growth comes up in the spring.  Trying to stuff the multitude of stems into the support after they’re a foot or so high is quite the task.  One that I admit I’ve tried.  You can find peony supports at the garden centre now.

There is one other rule that must be followed when dealing with peonies otherwise you’ll be wondering what you’ve done wrong and why your neighbour is cutting basketfuls of blooms while you stand by, forlornly, looking at lots of leaves but no flowers on your plant.  Peonies do not like to be buried too deep.  Bury them deep and they sulk.   The fleshy root system should be just below the surface of the soil, no more than two inches deep, very similar to the iris.   Be careful when applying mulch or organic matter that you place it around the roots and not over them.

Another reason for all leaves and no flowers is over-fertilization.  Peonies don’t require much in the way of fertilizer.  One light application in the spring of a perennial fertilizer such as GardenPro 8-12-16 Perennial and Vine will do the trick. 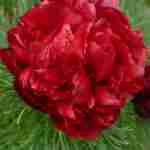 We get many phone calls each spring from customers wondering why the ants are marching one by one on their peony flowers.  Ants, like us, quite simply love peonies.  Ok, so they like them for different reasons but really they aren’t doing any damage.  Peony flowers secrete a sweet, sticky substance that the ants love.  There are many theories as to why the relationship between ants and peonies exists but the most logical is that the peonies are luring the ants with a sweet treat in the hopes that they’ll act as bodyguards while feasting, fending off marauding insects.  Maybe that is why peonies don’t seem to get many pest problems.  So, don’t spray the ants with insecticidal soap, let them do their thing.

Peonies can be susceptible to Botrytis blight, a fungus that shows up in particularly cool, rainy springs and summer, usually after a long stretch of dark, dreary and drizzly days.  It shows up as dense, gray mold on new shoots and later on developed parts of the plant, eventually turning the leaves and stems black. Avoid overhead watering and make sure you clean up and discard foliage in the fall.  Use of a fungicide in the growing season can help control Botrytis and cutting off any diseased bits before it gets a chance to spread.

Don’t let the Botrytis scare you off though.  As with most plants there’s always something that may crop up and considering that peonies reward us with masses of huge, often fragrant blooms I think it’s worth it.