Is it winter or spring?  You just can’t tell by looking out the window lately but if the garden’s progress is any indication I think spring is here and old man winter is on his way out if he hasn’t shut the door behind him already.  While not quite official, spring brings many delights when wandering through the garden but one of my favourite treats right now is the Hellebores.

Sometimes referred to as “Christmas Rose” or “Lenten Rose” hellebores are early blooming perennials that are in their glory right now.  Sometimes blooming as early as December and lasting well into April they are a must have for any garden.

Hellebores have gained popularity in recent years with new hybrids coming onto the market.  There’s the old standby, sold as Helleborus orientalis, a mix of whites, pinks, mauves, spotted or not spotted but lately some really interesting varieties have come along to tempt us.

Helleborus Sparkling Diamond is a perfect white, cool and crisp like a snowy winter morning.  It would nestle nicely in a “white garden” being the first to show its colours and would watch over snowdrops, another early bloomer.  Or pop it into a planter with spring blooming heather, a heuchera and a few primula to pretty up an entranceway.  This one would go with anything.

Ivory Prince is one we’ve had before at the nursery but its ability to hold its head up high keeps us coming back to it.  Creamy white flowers on a strong plant make this one a treasure.  Hellebores generally have somewhat nodding flowers but Ivory Prince tends to look you straight in the eye making it perfect for those who can’t bend over to enjoy the beauty of the blooms. 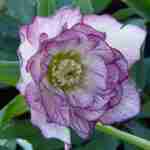 Peppermint Ice, as exquisite as its name, is a new variety for us at the garden centre.  White with extensive veining of plum purple, heavier at the edges and to top it off it’s a double variety.  This one would be exceptional in a planter near the door where you can enjoy its uniqueness every time you go past.  They would also look amazing mass planted.

Speaking of mass plantings, on my recent jaunt over to Vancouver to partake in some of the Olympic line-ups, I noticed extensive use of Hellebores in the city landscape.  Planted in huge numbers in the meridian along Taylor Way in North Vancouver and in planters throughout the venues these beauties were eye catching.

Hellebores are considered evergreen perennials, meaning they keep their leaves throughout the winter although once the new growth starts up in the spring I generally cut off the older leaves because they tend to look a bit rough around the edges and are usually laying flat against the soil.  Spring is supposed to be about fresh, new growth.  Who needs spotty, leathery leaves lying around?

Although they are usually called shade plants, Hellebores in fact do quite well in sunny areas during the winter but appreciate some dappled shade in the late afternoon during the hot summer months.  They’re pretty tough plants and can withstand some drought once well established.  They favour well-drained soil; rich in organic matter so add some Sea Soil or compost to the hole when planting and then top dress every spring with more of the same.

Take a wander around your garden between rain showers and see if there’s a spot calling for a fresh face.  Try a new hybrid or tuck in a favourite and enjoy these quiet beauties of winter…even if it feels like spring.