Ahhhh spring.  Robins chirping, bulbs poking out of the ground, cherry trees all abloom and hedging cedars travelling en masse down the streets.  Yes, this is the time of year that garden renovation ideas that have formed throughout the quiet winter months take shape.  Trenches are dug, soil is brought in, sprinkler lines get hooked up and hedges get planted.

You can create hedges out of just about anything, Buxus (boxwood), Taxus (yew), Ceanothus (California Lilac), basically any shrubby, dense plant or tree that doesn’t mind a bit of pruning.  Typical hedging material, though, consists of either Cupressocyparis (Leylandii Cypress), Thuja plicata (Western Red Cedar) or Thuja occidentalis (Arborvitea or Tree of Life).

Now I don’t normally go around saying “How many Trees of Life do you want today?” but apparently the name came about from the 16th century when French explorer Jacques Cartier learned that you could use this plant to treat scurvy, thus the name.   Since we don’t often see cases of scurvy around here we normally call this hedging cedar either hedging cedar or by it’s cultivated name, usually “Smaragd” or “Brandon”, these being the most popular.

Smaragds make the best hedges because they are dense and grow in a pyramidal shape with the foliage basically starting from the ground unless the plant is limbed up. They also don’t get excessively tall like some the typical trees we turn into hedges.

We sell Smaragds grown in containers rather than B&B (ball & burlap) because in my experience the container grown ones seem to be more likely to survive transplanting, probably because their roots are less disturbed than B&B ones.  B&B trees are field grown then dug out, quite often with not much root system or soil protecting what roots they have and then are either wrapped in burlap or shoved into a nursery pot before heading to the garden centres.   We had a higher return rate with these than we do ones that are grown from the beginning in nursery pots so we tend to stay clear of them if we can.

The main drawback to this hedge is that the deer love it.  Have you ever driven around and noticed hedging cedars apparently pruned into interesting shapes, kind of like chess pieces?  Well, it’s not an energetic, hedging-shear-crazy gardener with lots of time on his/her hands.   Deer quite happily will prune the bottoms of the hedge up to the point where they can’t reach any higher.  I’ve seen some people who have caged in their hedge like some wild animal in the hopes that the deer will give it a pass but why plant a hedge like that if you have to fool around with chicken wire or deer netting.  However, if deer are not an issue then Smaragds make an excellent hedge.  Plant them about 2-3ft from centre (centre of tree trunk to the centre of the next one).

Another popular hedging material is Thuja plicata, the Western Red Cedar in its cultivated form.  We carry “Excelsa’ which is a nice, bushy variety when mature.  Usually you plant these trees about 4ft to 8ft from centre depending on how quickly you want a dense hedge.   These trees can get big so pruning may be necessary at some point to top them off and keep them tidy.  Deer generally stay away from this variety however (and isn’t there always a ‘however’ when it comes to deer?) I’ve found that sometimes they may lightly graze the tree, particularly if it’s small or if it’s the time of year where there’s nothing much else tasty to nibble on.

The fastest growing of the bunch is the Cupressocyparis or Leyland Cypress.  We often just call it the Leylandii and it can grow rapidly which means it probably will require pruning each year to make it into a nice hedge.  But if you want fast then this is the one.  I took pity on three sad looking specimans that were heading to the bin, they were only about a foot tall, yellowed and half dead.  I planted them with Sea Soil, watered well and 5 years later my kids were hiding in them!  (see photo) 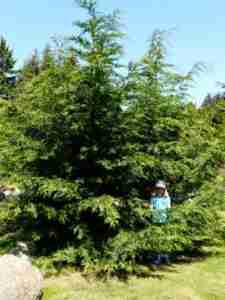 I call the Leylands the gangly one of the bunch because it tends to look that way for awhile until it settles into tree form.  Of the three hedging materials I’ve mentioned it’s probably the least likely to be munched on by deer (but don’t forget the ‘however’ disclaimer).   Plant these ones about the same as the Excelsas but bear in mind that they’ll grow fast so you probably don’t need them too close together.

When planting a new hedge please make sure you’ve got some good soil to get started with.  I always use Sea Soil Original when planting just about anything and even more so with hedging.   Some sort of watering system is important, especially in the first year or two when the trees are getting settled.   Long, deep soaks less often are more beneficial than light watering every day.  Fertilize your established hedge every spring with a slow release fertilizer that is specific to evergreens such as GardenPro 18-6-12 and top dress with Sea Soil to keep it green and happy.