Bullies in the Garden, Invasive Plants You Don’t Want

No one likes to be bullied.  In the schoolyard, at the work place or anywhere else.  Even in the plant world there are bullies.  They’re quiet, they’re stealth and sometimes they’re even beautiful but they are bullies just the same.  I’m talking about invasive plants.  From the popular English Ivy (Hedera helix) to dainty looking Queen Anne’s Lace (Daucus carota) these masters of space hogging are bullying their way through gardens and impacting native species and/or waterways. 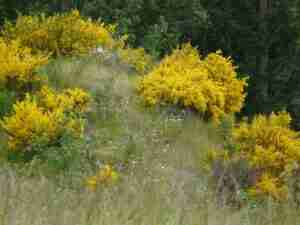 We all know about the battle against Scotch Broom (Cystisum scoparius) when every summer the broom busters are out in full force and we see piles of pruned branches of broom alongside the roads.  This is a perfect example of someone bringing in a plant, thinking it would look pretty in the garden, and the next thing you know it has taken over empty lots, sprung up in ditches, bullied its way into fields and parks.

Plants like English Ivy are popular for covering up brick, growing along slopes or spilling over garden walls.   Sure, it keeps its leaves all year round, it grows fast to cover up unsightly things and the deer generally leave it alone. The bad part is it gets into siding, it starts running through the garden and it pushes its way into crevices where you don’t want it to be.  And once you have it it’s very difficult to get rid of. 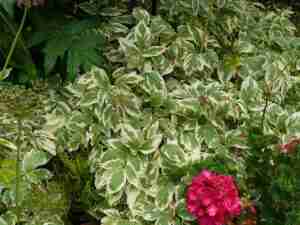 Have you ever seen Goutweed (Aegopodium podgraria)?  It’s a pretty, little variegated groundcover and it’s beautiful as an under planting in a shady spot or out in the sun along a fence.  Overnight, though, that pretty little plant multiplies, divides (and doesn’t subtract) and spreads until it has no where else to go. 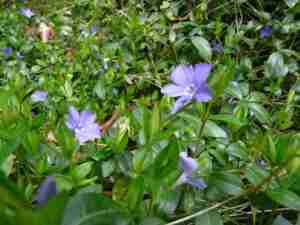 Another one is common periwinkle (Vinca minor).  Evergreen, spreading groundcover, great for banks and shady, hard-to-grow-anything-in areas and the bonus feature of little flowers in periwinkle blue, purple or white.  Turn around one day and it will have bullied its way into your lawn, through the whole garden and out the back.  It roots itself as it creeps along and becomes a dense carpet.

The problem with these bullies is that often they choke out the native species not to mention your prize perennials.  They take over so aggressively that anything growing in their way is quickly swallowed up and doesn’t stand a chance in the fight for sunlight, water or nutrients.

Even in your garden if you empty your old hanging baskets of annuals into a back corner to compost down there may be bullies lurking, waiting to get a foothold into the playground of the garden.  Finally free from the confines of the plastic tub they stretch their feet under the limitless soil and rear their ugly (and sometimes quite pretty) heads miles from where they started.  Okay, so maybe not miles but left unchecked who knows what could happen? 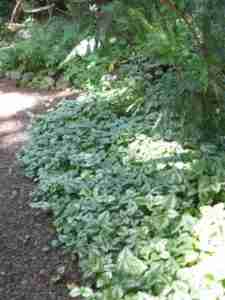 Lamium galeobdolon is one of those culprits.  Wonderful basket stuffer with silvery variegated leaves, it grows great lengths in one season and that should be your first clue to its aggressive nature.  It’s growing through the woods next to my postal box, probably dumped there during someone’s fall clean up.

Key words to look for when trying to avoid invasive bullies: vigorous, aggressive, self seeding, spreading.  Mind you, not all spreading plants are bullies.  At Cultivate, we tend not to sell invasive plants such as those mentioned here and can offer better behaved alternatives to areas that just need quick cover.